Miller (2002) provides a perspective using the traditional statistical approach for the purpose of prediction. Unfortunately his gloomy outlook on this topic is likely unchanged, even after decades of other advances and machine learning research being added to the statistical literature. However, the lure of variable selection is too great, so we should at least be aware its consequences. Heinze, Wallisch, and Dunkler (2018) provide a nice summary adapted in the following diagram: 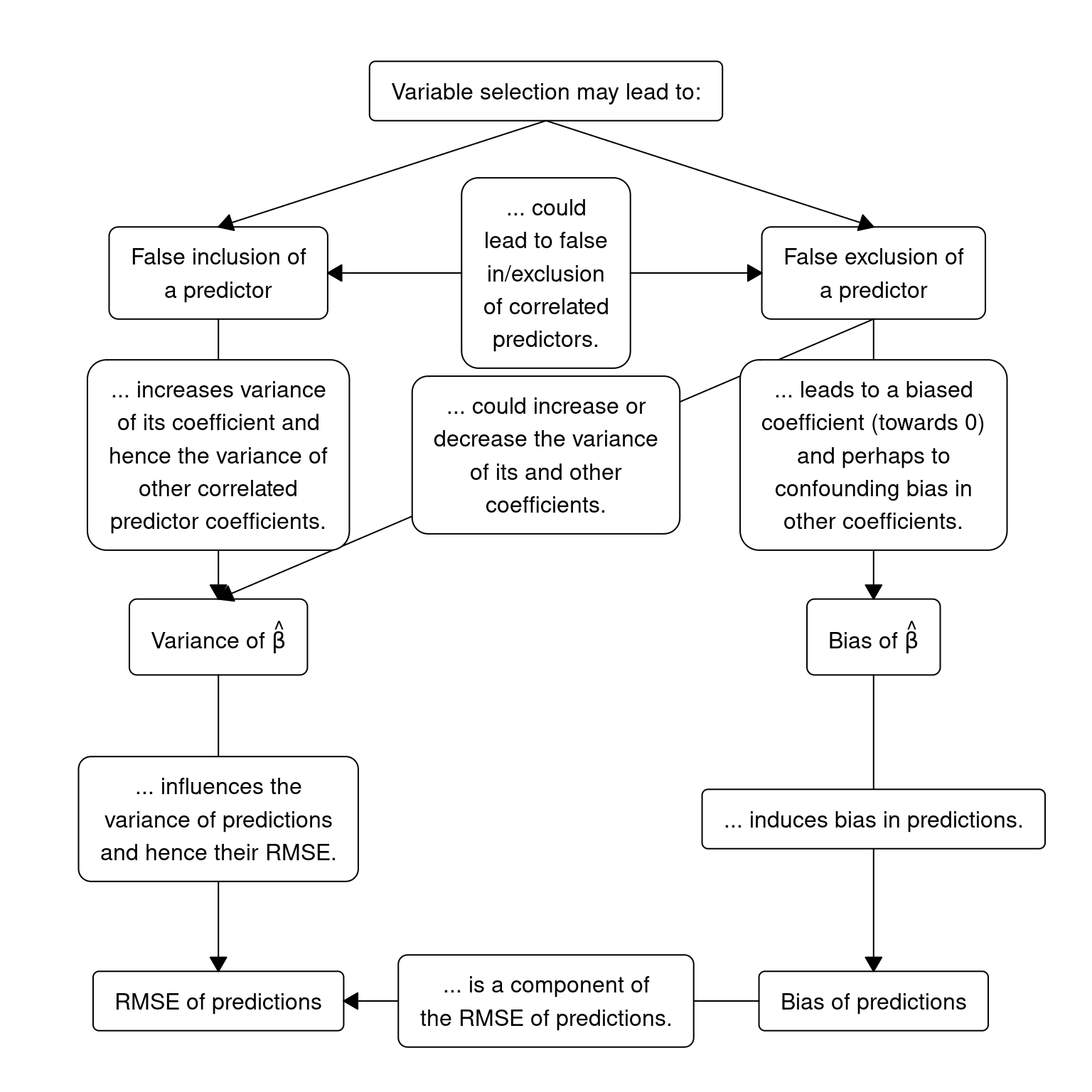 Variable selection can be conducted using external methods or as intrinsically built into the learning method. John, Kohavi, and Pfleger (1994) referred to the external methods as filters and wrappers. Filter methods generally assess each individual variable and it’s association with the outcome or for other seemingly important properties such as relative variance. Wrapper methods generally involve subset selection using the model of interest such as forward and backwards selection. In contrast to traditional linear models, tree-based models and L1 regularized models have methods for variable selection built into the model algorithm. Since statistical methods cannot distinguish between spurious and real associations, usually the best outcomes will be seen when subject matter expertise is used as a first step in the variable selection process.

The benefits of intrinsic variable selection are ease, speed, and efficiency (direct connection between variable selection and the objective function). However, this comes at the cost of dependency on learning method and tuning parameters. If using external variable selection, it is critical to include this step within the resampling process of model validation.

Unsupervised learning is used to estimate relationships between potential predictor variables without the use of a response variable. Common methods include principal components analysis (PCA) and clustering. These methods are used for the general goal of data reduction, providing more incite when working with a large number of parameters.

Variable clustering is used to partition variables into distinct groups so that variables within each group are similar and variables in different groups are different. A common method of variable clustering is known as hierarchical clustering. Hierarchical clustering is advantageous compared to k-means clustering because pre-specification of the number of cluster k is not required and the resulting dendrogram allows us to easily insert our own preconceived beliefs :). Cluster groups in hierarchical clustering are defined by cutting the dendrogram horizontally and grouping variables using the lines which were cut through. To form the dendrogram, you may use an agglomerative method (variables start individually and are pairs are merged up the hierarchy; bottom-up) or divisive method (variables start together and are split down the hierarchy; top-down). A measure dissimilarity is needed. Common options are Euclidean distance (linear and monotonic relationships), squared Euclidean distance, Hoeffding’s D (can capture a wide variety of relationships), Spearman’s \(\rho\) (monotonic relationships), or Gower’s distance (can be used with categorical variables). Finally, dissimilarity between 2 groups of variables are determined by their linkage. Linkage can be defined as complete (maximal (pairwise) intercluster dissimilarity), single (minimal (pairwise) intercluster dissimilarity), average (mean (pairwise) intercluster dissimilarity), and centroid (dissimilarity between group 1 and group 2’s centroid). Average and complete linkage methods are the most common. Generally best results are obtained when variables are standardized (centered and scaled) before hierarchical clustering takes place. To check robustness of results, try performing hierarchical clustering on a subset of the data or with different methods choices and see if results match.

Finally, you may wish to remove variables which are highly correlated or redundant with each other. Gregorich et al. (2021) provides a nice overview on how this may impact the analysis for the three major areas of modeling.

Filter methods usually assign a numeric score to each predictor or set of predictors. This allows us to rank the predictors (or sets) and use a cut-off to select which is included in the model. The following methods are commonly used to assign this score:

Alternatively, flexible multivariable models can test sets of predictors, using chunk tests for their combined importance, or model-free methods such as feature ordering by conditional independence (FOCI) by Azadkia and Chatterjee (2021).

External variable selection should always be embedded within a cross-validity framework. i.e. predictive performance is assessed on a hold-out/assessment/test set which is different than what was used to fit the model and assign variable importance. This ensures generalizability and assessment of robustness for the procedure.

Bootstrap resampling of the variable selection method may show if the data is capable of selecting a seemingly robust model. High inclusion frequency of the same variables would indicate a stable selection process, however, colinearity will obstruct this.